There is much prejudice against mirror lenses but although they have a bad reputation amongst some photographers for lack of sharpness and inferior resolution, astronomers seldom complain. Astro-photographers obtain wonderfully sharp and detailed astro-images when using their reflecting telescopes - but their technique is very different to that used by most terrestrial photographers.

Astronomers are very aware that for optimum imaging, their telescopes require time for the rear primary mirror objective to cool down (acclimate) to the ambient air temperature - thus astro imaging is not attempted immediately after setting-up.

An astronomical reflecting telescope’s rear primary mirror glass acts like a 'storage heater' when stored in a building and as soon as it's taken outside into the cooler atmosphere, the heat from the glass mirror radiates into the cooler air stream inside the 'scope - creating thermal air currents of unsteady/bouncing air with optical properties which can distort the image. Furthermore, the glass mirror objective lens continues to radiate heat for up to an hour during acclimation. If there is a temperature differential of just 3ºC between the glass and the air, imaging will be compromised. Unlike photographic mirror lenses, astronomical reflector 'scopes often include one or more cooling fans which assist cooling and considerably reduce the acclimation time.

Refracting camera lenses also need cool-down time after storage but because a refractor's prime objective is at the front of the lens, the temperature differential effect is minimal and they cool relatively quickly.  During its longer acclimation period, the heat radiated from a reflecting camera lens' rear primary mirror can distort the image in the same way as that in a reflecting telescope.

So maybe camera/photographic mirror lenses (which are basically smaller versions of astronomical reflectors) are not the unsharp optics that many photographers purport them to be. With adequate pre-imaging cooling, and with the support of a very rigid tripod and mount, sharp and detailed images should be possible. But remember that a 500mm, 600mm or 800mm mirror lens will require a shutter speed of 1/500 sec to 1/800 sec to reduce the chance of camera shake and thus image blur. Furthermore, ‘in camera’ image stabilisation might not be of much help when the camera is on a tripod - and a steady tripod will be necessary for efficient and stable viewfinder composition.

Unfortunately mirror lens images' 'doughnuts’ cannot be eliminated; photographers have to accept the fact that they will be present - but some consider they are a small price to pay for the convenience of using a relatively small and lightweight long focus lens. The severity of the ‘doughnuts’ in an image will depend on the subject, lighting and the mirror lens’ design - but all mirror lens’ images show the characteristic to a greater or lesser extent.

Judges are likely to comment regarding the ‘doughnuts’ phenomenon; this fact might affect your decision whether or not to enter a mirror lens image in an exhibition or competition.

The following fallow deer image taken with a Samyang 800mm f8 mirror lens shows the typical 'doughnut' phenomenon in the OOF background. Whether the doughnuts are too intrusive depends on personal preference but the relatively lightweight 900g lens fits into a small gadget bag - unlike an 800mm telephoto design which can weigh over 10 kg.

The Samyang 800mm mirror lens is not easy to use because it lacks fine focus control - in fact it has a notorious reputation for difficult focusing because the focus helicoil is far too coarse. However, anyone contemplating buying the optic can easily modify the lens by making a fine focus ‘wedge’ using rigid packing foam which cuts very easily using a bread knife. 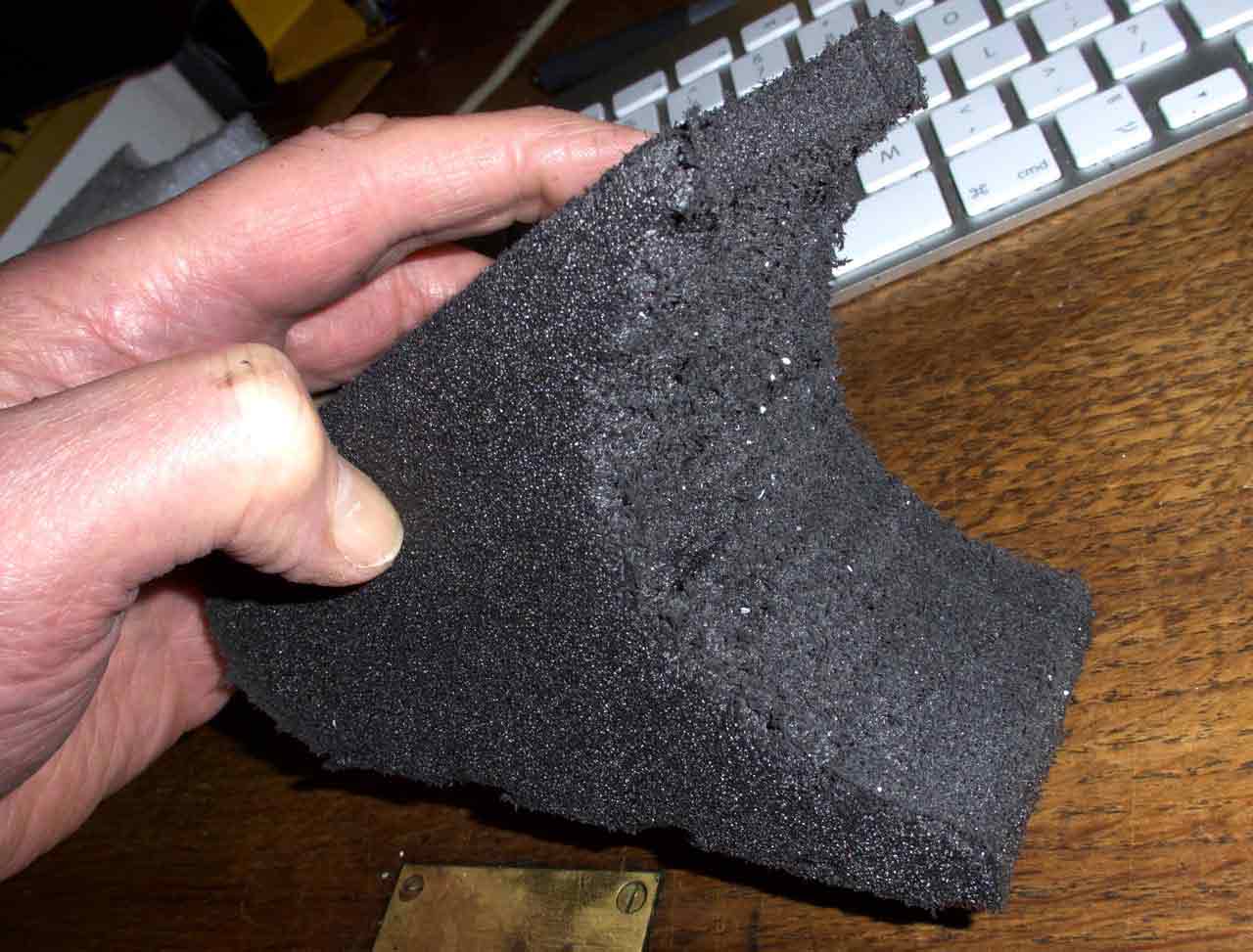 The accessory looks cumbersome but it works. Rubber bands provide sufficient pressure to attach and hold the rigid foam lever/wedge in place. The extra radius increases the focus travel and makes fine focus so much easier. I'm also hopeful that the lens might be usable with a 2x extender with the improved fine focus.

Perhaps the foregoing might encourage a few members to reconsider using a mirror lens - especially if you have a legacy mirror lens tucked away which can be easily adapted to a modern digital camera. Mirror lenses with focal lengths between 500mm and 1000mm are often available secondhand at bargain prices. The 900mm and 1000mm lenses can stick for months on dealers' shelves but they tend to be 'marque' brands rather than independent models - so are worth considering if you have the necessary tripod support.

Some photographers have 'given up' with their mirror lenses due to unsatifactory results. However, maybe their technique was lacking rather than the lens being a poor performer.  Ebay can be an excellent source for discarded mirror lenses - and at bargain prices.

Whilst what you say about conditioning a lens to the ambient temperature is undoubtedly true, I think it is likley to be a very small effect! The biggest problem with mirror lenses is inherent to the design. They have, of necessity a second mirror mounted at the front of the lens that bounces the light reflected off the main mirror back towards the camera's sensor. This front mirror occupies an appreciable fraction of the aperture through which light enters and means that, unlike a "normal" refractive lens, much of the aperture cannot be used to collect light (and also, inceidentally causes the doughnut shaped bokeh). This design both restricts the maximum aperture and also means that the aperture is fixed - i.e. you cannot change the aperture of a mirror lens. They tend to be f8, although some longer focal length ones (you mentioned 600mm and 800mm) are f11 or even higher. That is one of the reasons that they are almost always manual focus. In most cameras, the autofocus won't work at these relatively high f-values. It also restricts the creative possibilities - you cannot change the depth of field - you get whatever the fixed f-stop gives you!

I think it is probably the two factors of the unattractive doughnut bokeh and the fixed, large f-stop - whith its lack of control of depth of field - which have meant that they have never been all that popular with photographers. Some of the major lens manunfacturers (e.g. Nikon, Ziess) have dabbled in mirror lens in the past, but I don't know of any of them that currently produce one. So the market is dominated by 3rd party lenses at the relatively cheap end (mostly Korean made I think - brands like Opteka and Samyang) . Some of the stuff you see on eBay is at the very cheap end!  If you look for independent reviews of these lenses you will find thay are cheap for a reason - they are pretty rubbish! Tamron did make a SP 500mm f8 (adaptall mount) mirro lens which had a good reputation and can still be found second hand.

Yes there are poor quality mirror lenses and better quality mirror lenses. The silvering tends to deteriorate especially on older examples; silvering can be either front surface or rear surface and coated and uncoated; rear surface silvering is more stable and tends to used on the better quality designs. The 'radiator' effect is a real mirror lens anomaly - which is why astronomical telescope mirror lenses have built-in fans / cooling systems - but even with fan cooling the primary mirror takes c. 30 minutes to acclimate to the ambient temperature. Camera lens manufacturers are unlkely to include fans on their mirror lenses. Astro photographers are very much more aware of the primary mirror radiator effect - they use their  'scopes frequently and for longer periods.

Independent reviews have often been wriiten by photograohers who used flimsy tripods and inadequate tripod heads - thus their images were not always at optimum sharpness. Astronomy magazines' astro reflector 'scope reviews always state that the lens was given time to cool before use - thus minimising the radiator effect whereby the airstream inside the 'scope distorts the image. Consider the similar effect seen when an aircraft jet engine heats the surrounding air and distorts the view.

Samyang lenses made in Korea can be excellent; in my experience the 800mm Samyang mirror lens is very good - but the jury's still out regarding the 500mm - and the 2x extender is poor. We get what we pay for - but the better mirror lenses' potentials can be realised and optimised by use of solid tripods and by allowing adequate cooling time - or pre-cooling prior to use by e.g. storing in an unheated garage. The better quality 'legacy' mirror lenses included Contax (Zeiss) Mirotar, Olympus OM,  Tamron SP,  Leitz (based on the Minolta design) and Minolta - the latter now available as the Sony AF 500mm mirror lens and generally quite highly regarded, and in demand both s/h and new.

The doughnut effect varies depending on subject. When present it's usually a 'given' that judges will comment - but it can be removed in post processing - and judges' remarks should not rule everyone's photography.

Unlikely that a regular photographic mirror lens will ever equal the performance of a quality photographic refractor lens - but lightweight compact mirror lenses have their uses. Image shake is always a risk when using mirror lenses even with a solid tripod. Any apparatus shake is magnified at the image plane so it's advisable to use a camera's self timer thus allowing a couple of seconds for any shake to dampen.

Regarding the fixed aperture - it's possible to use a variant of a Waterhouse 'stop' in front of or around the secondary mirror. Solar observers using astro reflecting (mirror) telescopes use a special lens cap which has a removeable section thus reducing the aperture. A variation on same with a varaiable diaphragm has been published online for photographic mirror lenses - but it's unlikely that many mirror lens users will be keen to adopt the idea because it's a specialist DIY modification.

Many photographers using mirror lenses for the first time do not take adequate precautions for optimising performance. They assume it's a small 'short' lens but forget or maybe do not realise that the image path inside the lens is folded/reflected back and forth three times. Some even assume that their little mirror lens and camera can be handheld. They obtain poor results - publish them - and many then assume, incorectly, that all mirror lenses are poor lenses. Technique is very important when using mirror lenses.